Uranium Glass – pretty and only slightly radioactive!  Uranium, the same material that radium is derived from and makes nuclear power plants run, is yellow in its natural state.  It was discovered by German chemist Martin Klaproth in 1789 and named after the planet Uranus, which has been discovered only 8 years earlier.  Reports say that Klaproth experimented using the material to color class, but the first commercial use of the material in glassmaking started in the 1830s in Bohemia. 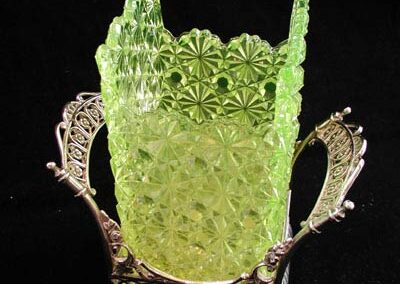 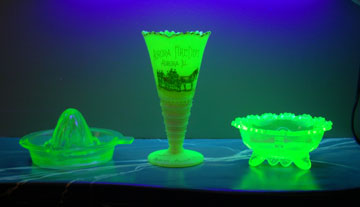 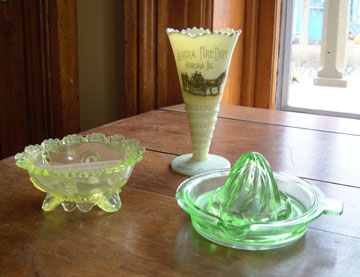 The normal color of uranium glass ranges from a pale yellow to vibrant green (depending on other materials in the glass mix), and fluoresces when under a black light.  Even in natural dim light, it seems to glow.  Here are a few more examples from the collection of the Aurora Historical Society, in addition to the celery dish (left).

Many people are concerned with the amount of radioactivity in such pieces, but is it very small amount – only .1 – .2% of the glass is uranium, usually.  Compare this to the fact that potassium, an element in the human body and readily eaten in table salt and bananas, is also radioactive.  The human body is .2% potassium.  So the levels of radiation are comparable to those already in the human body.

Other names the glass has been known by: Vaseline glass (because it resembled the yellowish greasy color of petroleum jelly of the past), custard glass, canary glass, even some green depression glass was uranium in it!  These names primarily describe the appearance of the glass, not the uranium content.

The height of uranium glass production was from the 1880s to the 1920s and was produced by nearly every glassmaker.  From 1943 to roughly 1958, the production of uranium glass ceased because all uranium was confiscated by the US government for war efforts and experiments.  Today, uranium glass is still occasionally being produced by makers such as Fenton and is the signature work of artist Jack Loranger.