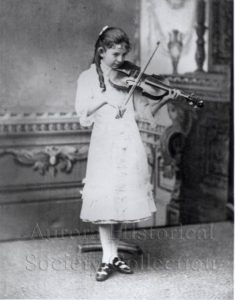 Maud Powell (1867-1920) was the first native-born American violinist of either gender to achieve international recognition.  Born in Peru, Illinois, Maud came to Aurora at the age of three, following her father, William B. Powell, then Superintendent of East Side Schools.  Maud’s mother, Minnie, played piano and composed music as well, and was her first music teacher.  At the age of 7 Maude started violin lessons with G. W. Fickensher.  The very same year she heard Camilla Urso perform at Coulter Opera House in Aurora.  Urso was an early French master violinist, and “showed me what it was I wanted to do – what all my crude scrapings might become” as Maud recalled years later.

At the age of 9, Maud was playing with Stein’s 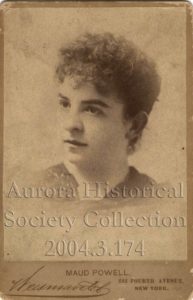 Orchestra in Aurora and was taking lessons in Chicago with William Lewis.  By the time she was 13, she was being called “one of the wonders of the age.”  Being a musical genius, Maud did not get much of a chance to be a child.  She was a slave to her art, practicing up to as many as 12 hours a day.  Even playing games she had to be careful – she rolled her hoop with her left hand to not spoil her right hand for her bow!

At the age of 13, Maud traveled to Europe to study for further study with her mother and brother – leaving her father behind in Aurora.  She studies for three years in Germany and France, and toured as a concert violinist in Europe for one year.  She returned to the United States in 1885 as an 18-year-old violin virtuoso.

Maud attained many “firsts” in her career, including 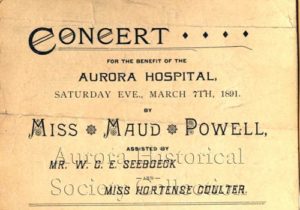 Even though the family moved from Aurora shortly after her return to the US, Maud never forgot her home of Aurora.  The people of Aurora gave her a gold snake bracelet with ruby eyes upon her trip to Europe, and she made a point to wear it each time she visited friends here.  Though she had thoughts of retiring here, Maud died at the age of 52 of a heart attack in Uniontown, Pennsylvania.  As her pianist said; “Her heart was worn out.”

For more information on this amazing Auroran, check out the Maud Powell Foundation’s website!