Charles Lietz was a man of many talents.  He was born in 1870 at the corner of Benton Streetand East Avenue, attended CenterSchool, and at the age of 14 he started work in the clothing business.  At only 26 years old, he became part owner of Wade, Lietz & Grometer (later Lietz & Grometer) department store.  As a successful business man, he married Lida Thorwarth Lietz in 1901 in Chicago.

Mr. Lietz, “Charley” to those who knew him, was incredibly involved in the civic life of Aurora.  He had a fine tenor voice and sang with several musical groups in town, such as the Peerless Quartet in the 1890’s, the Orpheus Quartet, and with St. Mary’s and Holy Angels’ church choirs.  He was considered a mechanical genius, always devising original mechanical displays for his clothing store windows.  At times, the displays attracted such big crowds that traffic was blocked and it was necessary for the police to clear the sidewalk!  Decorating the downtown streets for large celebrations or conventions also fell to Mr. Lietz.  “Let Charley do it” seemed to be the slogan, and he never failed.  It was later remembered in the Beacon News, “Aurora never had to worry about a show worthy of the town…[Mr. Lietz] hung the decorations, got the necessary devices and controls, put them in place, properly connected.”  He would spend the night at decorating downtown streets while the city slept and Aurorans would awaken to find the downtown district “in gala attire.” 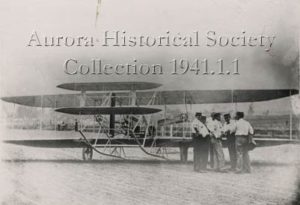 Lietz among the men with the Wright plane at the Aurora Driving Park, flown by Fred Welch

Mr. Lietz contributed to one of the biggest events in Aurora’s history – the Wright Brothers plane flight in Aurora, July 1910.  Mr. Lietz was a member of a 3-man committee sent by the City to Dayton, Ohio, to arrange for the exhibition to come to Aurora’s Driving Park (today’s Riddle Highlands area).  After several attempts foiled by the weather, a successful flight was observed by 6,000 people on July 7.

Lietz among the men with the Wright plane at the Aurora Driving Park, flown by Fred Welch

At his death in May 1923, at the age of 53, a former mayor told the Beacon News that “one of Charley’s best traits and one unknown to most people, was his habit of helping those in need” and that “dozens and dozens of families received help from him.”  Although he and his wife had no children, he derived much pleasure from his annual Christmas presents to many motherless children.  “Charley would personally go to a family in need to give them aid; that he never told anyone about this humanitarian habit and few other than those who received his help knew that he was doing it.”