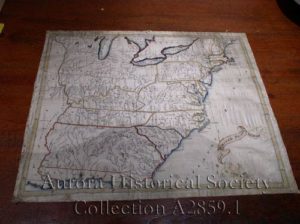 Map samplers were a good way of teaching young girls not only their embroidery stitches, but geography, spelling, and exacting attention to detail!  This map of the eastern portion of the United States by Ann Swan is a fine example of this work.  The map is accurate for the time, and is detailed down to longitude and latitude marks.  Bodies of water are painted blue around the edge, such as the Great Lakes, Gulf of Mexico and the Atlantic Ocean. The territories and states are edged in chenille, in yellow, red, black and green. An intersting feature is the newly acquired Louisiana Purchase along the left side. In the lower right is where the artist signed this piece; it reads “United States, Ann Swan 1809.”

The map was donated to the Aurora Historical Society in 1941 by Alice Barr, granddaughter of Alice Swan (later Alice Moseley). Detailed photos are below, including a shot of the original newspaper backing! 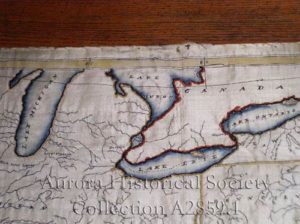 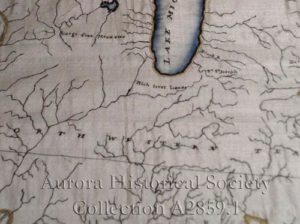 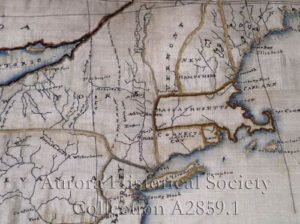 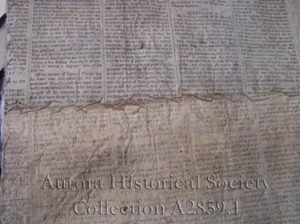 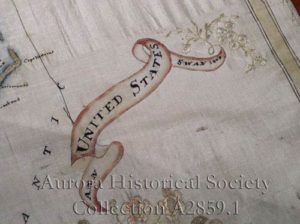 Other fine examples of map embroidery can be seen on-line in the collections of the Wisconsin Historical Society, the Smithsonian Museum and the Fitzwilliam Museum in Cambridge, England.